A body at rest continues to rust, thought the Monkey. I should get up and go. Food was no problem. His curiosity was beckoning him. He knew that he could go out only to the extent that he could go into the cave. He wanted to explore both the worlds.

He decided to go in

The Gallery was a complete work of art. He couldn’t imagine whose work it was and how long it would have taken them to complete it. They should have been working on it for ages. He wondered whether the humans would have done it prior to their exodus from the Planet. It could not be because had it been done by them, they wouldn’t have been compelled to take the exit route. How could one ever imagine to leave such a beautiful planet ?

He was brought back from his reflections by a shaft of light from far above which fell on an etching on the rock face.

He stood gazing at it for a long time and exclaimed: Hammer of Hammers! 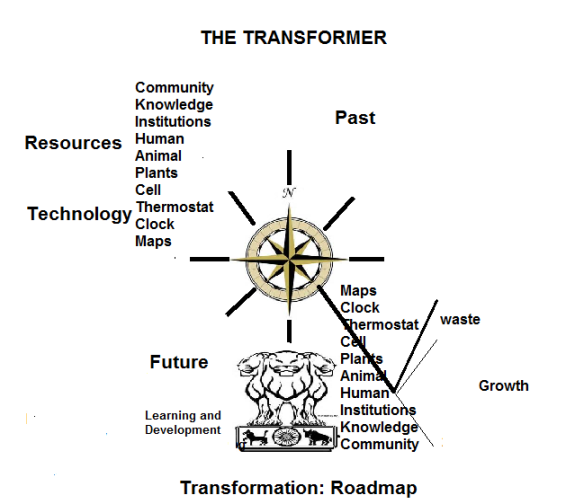 More than enough for a few days, thought the monkey.

It took much more than a few days. He found that he could go out into the external world far more than he had ever been. He stretched himself for weeks to find how far he could extend the boundaries of his sojourns

It was the day after the big thunderstorm. He had woken up many times during the night by the lightning and thunder. He was feeling called to go into the cave to fulfill his responsibility to the community to remain a monkey. The weeks of deliberations had led to flashes of intermittent lightnings inside his monkey brain. He knew what he had to do with the map that had taken him weeks to make sense of.

He had his etching tools. He went to work, doing his bit in the scheme of things.

He added a traffic signal to the two roads in the map.

He knew which of the roads, the humans had taken. He had made his own personal decision to take the road not travelled. As for the others he was not really concerned. He knew that Nature is much more ruthless than gravity and it would take care of itself. I too am that. He remembered a verse from his mom’s teachings, Thattwam Asi